Reported via mobile in the Fly Tipping category anonymously at 22:03, Tuesday 24 January 2023 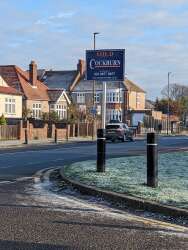 This board was originally illegally attached to one of the Oakways street signs. I asked the estate agent to remove it and they said they would, but it has now been moved a few metres away to a bollard on the corner of Oakways and Bexley Road, so is still illegally placed. I asked them again but they have decided to ignore me. This is a regular problem with various estate agents that makes the entrance to Oakways look really scruffy.