Reported via desktop in the Roads/highways category anonymously at 15:53, Thursday 24 November 2022 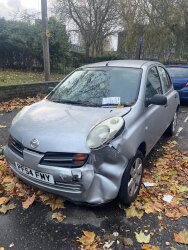 Damaged silver Nissan Micra VRM PF54FMY has been parked up at location for several months if not approximately a year. I note this has been reported several times already yet it remains. Tyres believed to be in tact, no known mould, vehicle has been stationary for several months to one year, not roadworthy due to significant damage. No known waste inside, front and rear VRMS match, VIN number N/K. This vehicle appeared alongside another vehicle which was parked on the other side of the road, possibly RTC. The other vehicle has since been removed but this Nissan remains. It is occupying a free parking bay which is a nuisance to residents. Taxed (surprisingly) until January 2023.