Communal bin needs to be replaced

Reported via mobile in the Pavements/footpaths category anonymously at 18:12, Monday 12 September 2022 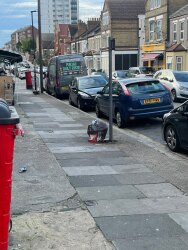 I don’t know the exact reason why the communal bin outside the newsagents has been removed but it needs to be replaced. It’s been gone for a long time now and people are just dumping their rubbish on the street when they could quite easily put their rubbish in the bin if there was one provided. Please can the bin be put back As it’s not nice having to see rubbish all over the pavement when this could be easily be avoided.