Reported via Android in the Graffiti category by David Gardner at 14:39, Sunday 21 August 2022 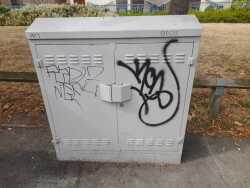