Graffiti on the side of number 59 Vanbrugh Hill

Reported via mobile in the Graffiti category anonymously at 16:58, Thursday 11 August 2022 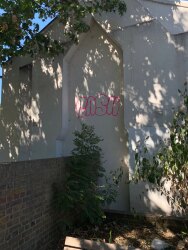