Reported via iOS in the Graffiti category anonymously at 09:53, Tuesday 21 June 2022 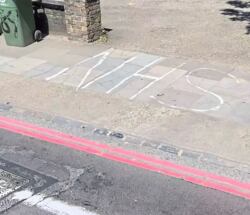 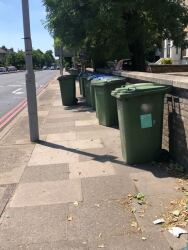 There is NHS spray painted across the whole pavement at this location. I assume it’s to prevent their driveway being blocked - however I’m not sure what would be blocking it given it’s a red route and on the A2 right by sun in the sands roundabout other than the bus stopping at the bus stop which is only to pick up & set down passengers. Given this entire row of houses leave their dustbins after being emptied on the pavement blocking it most weeks for wheelchair users without another thought I don’t think post pandemic they should be spray painting the pavement. A ‘medic on call’ sign (if they are) or at least washable chalk used if it was for during lockdowns may be acceptable, but this seems a bit over the top.