Bins not being collected

Reported via mobile in the Pavements/footpaths category anonymously at 11:28, Friday 13 May 2022 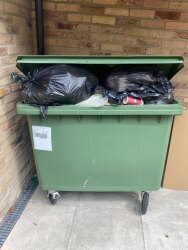 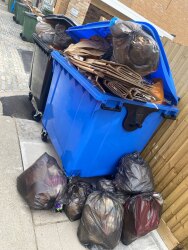 We are a set of 4 new flats that have been moved in for 3 months. In that time, the bins have been emptied once. We now have 4 weeks worth of bins on the street, with bins piling up in our flats and in our gardens which is causing problems with foxes and rats. I spoke to a bin man, and he said greenwich will refuse to take the bins because they don’t not have the Greenwich Council logo on them. These are property of Greenwich council, as this was how we received the bins. These need to be emptied as none of us residents can throw our bins away, heading into the summer months especially this will prove a problem. Please help