This car has been abandoned.

Reported via mobile in the Roads/highways category anonymously at 10:52, Sunday 10 April 2022 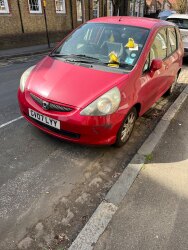 This car is parked without a resident permit outside my house and there is no sign anyone is going to collect it. It has been parked outside for over six weeks. I would like to see the council contact the owners or have it removed.