Litter including food waste on pavement outsude shop. Pavement stickers which were put down by council staff last week have already been removed.

Reported via mobile in the Pavements/footpaths category anonymously at 18:07, Tuesday 5 April 2022 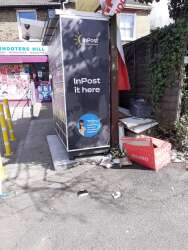 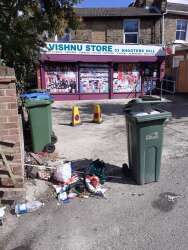 Whole area of north side of Shooters Hill, from Baker Road to Occupation Lane, has litter problems, including lots of discarded face masks and plastic bottles. Council staff stuck anti-litter signs to the pavement, but these were removed within days.