Reported via iOS in the Roads/highways category anonymously at 17:33, Wed 22 December 2021 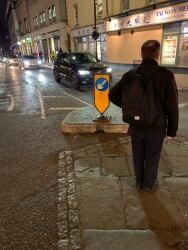 See image. That large block has been moved from its original position and is blocking part of the oncoming traffic