Reported via mobile in the Roads/highways category anonymously at 16:19, Sun 7 November 2021 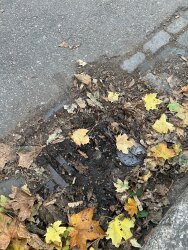 I reported this problem on Sunday 31st October 2021. Saying that the blocked drain is causing bad flooding to my street and front gardens. Water can not drain though this as it is too badly blocked up with mud and debris. On Monday 1st November 2021 @ 08.35 my reported problem has been updated to fixed. Now I have been out to check the drain today and it’s still the same so clearly this hasn’t been fixed