Reported via mobile in the Roads/highways category anonymously at 17:20, Wed 20 October 2021 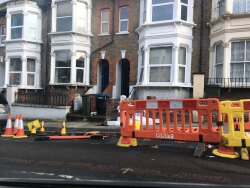 This has been like this since September - roadworks marked out but not completed. It’s reducing parking spaces for residents and causing an eyesore and hazard. No-one has worked on this for weeks, it’s just been left like this.