The untouchable white van is back - now parked on pavement

Reported via desktop in the Abandoned vehicles category anonymously at 09:06, Saturday 16 October 2021 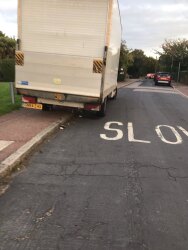 Still no tax or MOT 14 months on….so obviously no insurance either…..and parked on the pavement this time so people in wheelchairs and with pushchairs have to walk in the road so could easily get hit by the usual speeders in this road. This van has been reported so many times to the DVLA and Greenwich council it’s beyond a joke, NOTHING is ever done about it - it’s still being driven regularly then gets dumped for weeks at a time. Why is it NEVER picked up by ANPR ???