Reported via desktop in the Roads/highways category anonymously at 17:53, Friday 17 September 2021 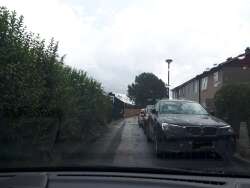 There is an overgrown Hedge where cars park opposite and stops the flow of traffic. It is a Health and Safety issue as Emergency Services would not be able to access the road if required and Residents find it hard to to get out. The Hedge was cut back in the summer and it was a great improvement but has overgrown again.