Abandoned car with no number plate

Reported via desktop in the Abandoned vehicles category anonymously at 10:50, Tuesday 14 September 2021 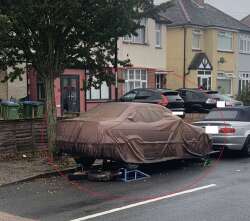 Abandoned car with no road tax, causing inconvenience and blocking parking spot. Occasionally some youngsters are seen repairing the car but are not residents of Landstead Road. Has been at the same spot for over 8 months. Outside house no 11 - This car does not belong to no 11.