Reported via mobile in the Abandoned vehicles category anonymously at 08:40, Saturday 11 September 2021 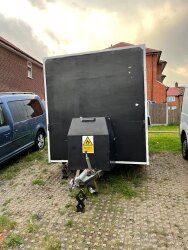 Trailer has been dumped here for weeks. It’s being stopped from rolling by jacks and the one at the front is broken so it might roll out into the road. Parked across two parking spaces. The road has become increasingly congested and now people are dumping vehicles here too.