Reported via desktop in the Pavements/footpaths category anonymously at 16:55, Sun 5 September 2021 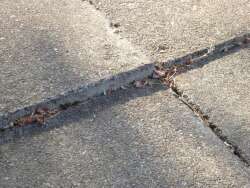 The pavement has risen again outside 20 Walnut Tree Road and is a trip hazard. I have tripped twice. Presumably due to that huge tree. Saplings have also punched through the asphalt you put down to fix the problem last time and now the pavement it is lumpy.