Street needs sweeping as loads of rubbish and cigarette butts

Reported via mobile in the Roads/highways category anonymously at 14:13, Thursday 2 September 2021 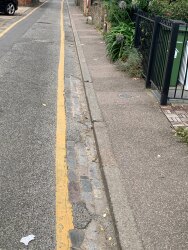