The car has been left “parked” outside no 21 Sandtoft for over 14 days without being moved. As you can see the exhaust is falling off and it would appear that the silencer has been removed.

Reported via mobile in the Abandoned vehicles category anonymously at 09:06, Wednesday 1 September 2021 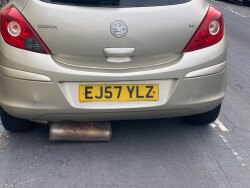 The car has been been parked for over 14 days. The car is in a bad condition and is causing a parking obstruction to other residents in the area. Due to the condition of the car there if a risk of vandalism and a threat to other card who may also become victims of catalytic converter theft. There is already another “abandoned car o/s no 40. These cars along side weekday parking between 8:30-4:30 of support staff at the local primary schools, fan traffic at the w/e is putting pressure on those residents who require daily access to their cars.