Dropped kerb outside 81 should be yellow line

Reported via mobile in the Roads/highways category anonymously at 23:49, Monday 30 August 2021 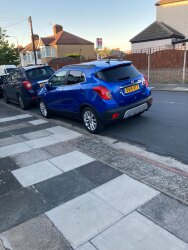 Woodhurst rd outside 81 after dropped kerb which was supposed to be double yellow lines, the same as on bus stop side opposite, Bus 469 always struggles to turn with vehicles parked and continuously uses their horn for vehicles to move outside 81 Such a nuisance for the residents with access to their dropped kerb driveway.