Reported via desktop in the Pavements/footpaths category anonymously at 16:29, Sunday 22 August 2021 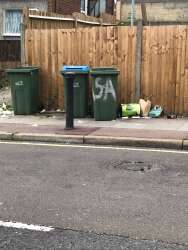 Rubbish left on pavement after Friday weekly collection. Also the three wheelie bins shown in the picture are never moved. The is on Plumstead High Street near the juction with Wickham Lane, near lamppost 70P1135.