Reported via Android in the Pavements/footpaths category anonymously at 13:17, Sunday 1 August 2021 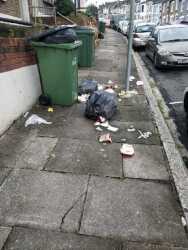 Rubbish has been left on street as the bins were not collected this week. Foxes have got into the rubbish in the night and it is strewn across the street