Reported via mobile in the Pavements/footpaths category anonymously at 11:18, Sunday 18 July 2021 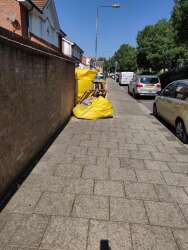 Builders debris on pavement , been there two weeks and now being added to! Is this acceptable? It's a mess and unfair on wheelchair users and prams.