Reported via mobile in the Roads/highways category anonymously at 06:32, Sunday 4 July 2021 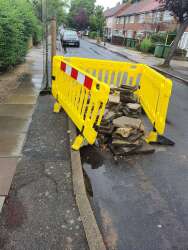 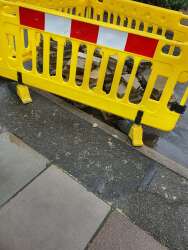 I reported this as flytipping as it was just left there, by men who said it would be gone next day, and several days later it is still there, so It seemed to me as they never came back to remove it, like flytipping, i had no way to tell they were council workers/contractors as just said riley on their high vis jackets, and all they said when I asked why they were putting the slabs in parking space outside my home, was they would be gone next day, they didn't tell me they were working nearby and so on, I understand you have asked them when they will clear them, but as I said they told me 'don't worry, be gone tomorrow, no problem' - their words, and it is still there, so unless you contact me to let me know when it is they plan to remove them, and/or give me a follow up to ask me if they have been cleared I don't know what else I am expected to do other than fill in yet another report, when it was left there on weds, not gone next day as stated, nor the day after, nor the day after that, still waiting, as I have a hedge on border of my home (which I don't believe the council would remove or maintain so I have to pay for it to be trimmed as and when I can afford to as I have health issues that prevent me being able to myself), and live on the corner, these paving slabs are right where anyone visiting me would park to be able to view and check their vehicle from my home, it is frustrating enough when it is regularly filled by visitors to other properties or cars visiting the football club over the road, but as the space has been filled by something just left to be disposed of (so in other words rubbish) on a surpassed day, with no option for me to be informed if/when, and confirmation to the council of some form to check it has actuaĺly been removed this time, I really don't see as acceptable, when it does obstruct my visitors from parking to visit me, somewhere visible to them from my home, and to collect me or drop me off the nearest point to my property, when I have health issues, . I live in a bedsit, so have very little space, and this adds to my mobility issues when I have to manoeuvre around things indoors, yet when I left an item outside, but inside my front garden, not obstructing anybody whatsoever who had any form of need or right to be there, or even those who might not have had the right or need, as it was against my homes wall, not in anyone's walkway at all, I had council men knock on my door, and giving me formal letters in complaint, which they followed up to check on, making me feel like wrongdoer, to remove them, when the only issue they could have been causing anyone but me, was cosmetic, if they had been looking into my front garden at my home which they really had no need to be, and it had only been put there so I didn't have to try get it outside on my own, at such a date as the council bulky waste collection could be arranged for, which I had planned to arrange ASAP. ....so if that situation was unacceptable to you, how on earth should broken paving slabs (rubbish) being left in the road, outside my home, obstructing what little close parking there already is available, uncollected on the day stated and still uncollected several days later...why should that be acceptable to me without any follow up than to say you asked them when they will do it? Not even that you'll let me know when it will be done or check back with me when it is meant to have been done to see if it has, am I meant to have that parking obstruction and unsightly mess to look at indefinitely and not report it?

This report is now closed to updates. You can make a new report in the same location.