Reported via desktop in the Roads/highways category anonymously at 15:18, Friday 2 July 2021 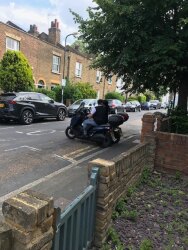 I have commented about these guys before due to a fight which broke out amongst them and one guy was pinned over my railings, the noise of constant revving, shouting until after 10pm. Today I had to walk from outside no48 to my home at the bottom of the street with all my shopping because there were no parking spaces. I couldn't pass along the footpath because the boxes on the back of the bikes jut into the footpath and there was a bin which you can't see very well from my photo behind the bike leaving only a tiny gap to pass through. When I walked past with my shopping the girl on the bike shouted chill! relax !when I explained I'd had to walk all the way with my shopping and couldn't get past, then when I took this photo she screamed f***king bitch.. how lovely they are!