Reported via desktop in the Abandoned vehicles category anonymously at 16:52, Saturday 5 June 2021 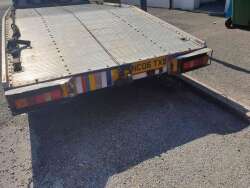 This Pick up truck has been left unattended for approximately one year now. DVLC web site shows it has no Tax or MOT. This matter seems to have been reported by another resident around six months ago but the this truck has still not been removed. Surely it's only a matter of towing it to the nearby police car pound to clear this illegal vehicle from the streets.