Reported via mobile in the Roads/highways category anonymously at 10:20, Wednesday 12 May 2021 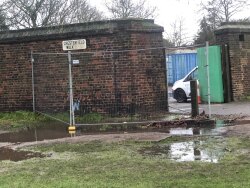 These were used more than a year ago when the council yard was broken into and some vehicles stolen. These railings were used as a temporary gate for the yard until new replacement gates were erected. Now redundant.