Apparently abandoned car outside our house

Reported via desktop in the Abandoned vehicles category anonymously at 10:33, Tuesday 20 April 2021 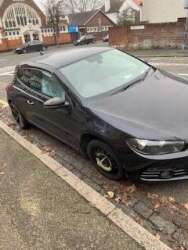 The car has not moved. It has a space saver tyre on it that is only partially secure. It was locked but is now open, possibly broken in to. One number plate has now been pulled off