Car inappropriately parked outside the house with rubbish outside it

Reported via mobile in the Abandoned vehicles category anonymously at 11:55, Monday 19 April 2021 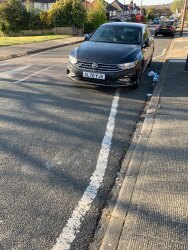 The vehicle appeared outside of our house between 21:00 and 23:00 on Friday night (16 April). It is parked quite a bit from the curb and makes it difficult for us and our neighbours to use the driveway. There is rubbish outside the car and inside the car. The car has tinted windows at the back and is also slightly damaged/scratched. We had a car stolen ourselves a year ago and the way this car looks is in a very similar condition to how our car was when it was found.